HomeLibraryWait for me! I am your leader…. The FDA is 15 years late on this…

WASHINGTON — After staunchly defending the safety of artificial food colorings, the federal government is for the first time publicly reassessing whether foods like Jell-O, Lucky Charms cereal and Minute Maid Lemonade should carry warnings that the bright artificial colorings in them worsen behavior problems like hyperactivity in some children. 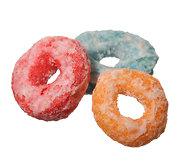 A 2006 art installation in San Francisco featured Jell-O, which could be affected by the review. 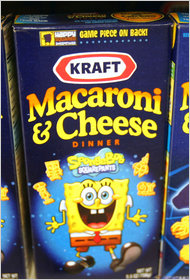 Kraft is making some of its macaroni and cheese without dyes.

The Food and Drug Administration concluded long ago that there was no definitive link between the colorings and behavior or health problems, and the agency is unlikely to change its mind any time soon. But on Wednesday and Thursday, the F.D.A. will ask a panel of experts to review the evidence and advise on possible policy changes, which could include warning labels on food.

The hearings signal that the growing list of studies suggesting a link between artificial colorings and behavioral changes in children has at least gotten regulators’ attention — and, for consumer advocates, that in itself is a victory.

In a concluding report, staff scientists from the F.D.A. wrote that while typical children might be unaffected by the dyes, those with behavioral disorders might have their conditions “exacerbated by exposure to a number of substances in food, including, but not limited to, synthetic color additives.”

Renee Shutters, a mother of two from Jamestown, N.Y., said in a telephone interview on Tuesday that two years ago, her son Trenton, then 5, was having serious behavioral problems at school until she eliminated artificial food colorings from his diet. “I know for sure I found the root cause of this one because you can turn it on and off like a switch,” Ms. Shutters said.

But Dr. Lawrence Diller, a behavioral pediatrician in Walnut Creek, Calif., said evidence that diet plays a significant role in most childhood behavioral disorders was minimal to nonexistent. “These are urban legends that won’t die,” Dr. Diller said.

There is no debate about the safety of natural food colorings, and manufacturers have long defended the safety of artificial ones as well. In a statement, the Grocery Manufacturers Association said, “All of the major safety bodies globally have reviewed the available science and have determined that there is no demonstrable link between artificial food colors and hyperactivity among children.”

In a 2008 petition filed with federal food regulators, the Center for Science in the Public Interest, a consumer advocacy group, argued that some parents of susceptible children do not know that their children are at risk and so “the appropriate public health approach is to remove those dangerous and unnecessary substances from the food supply.”

The federal government has been cracking down on artificial food dyes for more than a century in part because some early ones were not only toxic but were also sometimes used to mask filth or rot. In 1950, many children became ill after eating Halloween candy containing Orange No. 1 dye, and the F.D.A. banned it after more rigorous testing suggested that it was toxic. In 1976, the agency banned Red No. 2 because it was suspected to be carcinogenic. It was then replaced by Red No. 40.

Many of the artificial colorings used today were approved by the F.D.A. in 1931, including Blue No. 1, Yellow No. 5 and Red No. 3. Artificial dyes were developed — just as aspirin was — from coal tar, but are now made from petroleum products.

In the 1970s, Dr. Benjamin Feingold, a pediatric allergist from California, had success treating the symptoms of hyperactivity in some children by prescribing a diet that, among other things, eliminated artificial colorings. And some studies, including one published in The Lancet medical journal in 2007, have found that artificial colorings might lead to behavioral changes even in typical children.

The consumer science group asked the government to ban the dyes, or at least require manufacturers to include prominent warnings that “artificial colorings in this food cause hyperactivity and behavioral problems in some children.”

Citizen petitions are routinely dismissed by the F.D.A. without much comment. Not this time. Still, the agency is not asking the experts to consider a ban during their two-day meeting, and agency scientists in lengthy analyses expressed skepticism about the scientific merits of the Lancet study and others suggesting any definitive link between dyes and behavioral issues. Importantly, the research offers almost no clue about the relative risks of individual dyes, making specific regulatory actions against, say, Green No. 3 or Yellow No. 6 almost impossible.

The F.D.A. scientists suggested that problems associated with artificial coloring might be akin to a peanut allergy, or “a unique intolerance to these substances and not to any inherent neurotoxic properties” of the dyes themselves. As it does for peanuts and other foods that can cause reactions, the F.D.A. already requires manufacturers to disclose on food labels the presence of artificial colorings.

A spokeswoman for General Mills refused to comment. Valerie Moens, a spokeswoman for Kraft Foods Inc., wrote in an e-mail that all of the food colors the company used were approved and clearly labeled, but that the company was expanding its “portfolio to include products without added colors,” like Kool-Aid Invisible, Capri Sun juices and Kraft Macaroni and Cheese Organic White Cheddar.

The panel will almost certainly ask that more research on the subject be conducted, but such calls are routinely ignored. Research on pediatric behaviors can be difficult and expensive to conduct since it often involves regular and subjective assessments of children by parents and teachers who should be kept in the dark about the specifics of the test. And since the patents on the dyes expired long ago, manufacturers have little incentive to finance such research themselves.

Popular foods that have artificial dyes include Cheetos snacks, Froot Loops cereal, Pop-Tarts and Hostess Twinkies, according to an extensive listing in the consumer advocacy group’s petition. Some grocery chains, including Whole Foods Market and Trader Joe’s, refuse to sell foods with artificial coloring.